Skip to content
Previous Next
Geelsgårdskolen does physiotherapy with Hopspots

SEN: “Everyone can participate in their own way”

A couple of weeks ago I visited Geelsgårdskolen in Virum, Denmark, where they had just bought a set of Hopspots. I did that because we at CxD were quite curious about how their first period of time with the interactive tool had been and not least to learn more about how they use Hopspots in this SEN.

Back in January when we participated in BETT-show, a huge international EdTech tradeshow in London, we were paid a visit by Line Torp from Geelsgårdskolen at our stand. Line had never seen Hopspots before, this was the very first time, but she immediately spotted that Hopspots was really some for the kids back home at “her” school. Line works in the therapeutic department at Geelsgårdskolen, and shortly after having returned home from the tradeshow, she contacted us as she really want to buy some Hopspots for the school, because as she said: “If we see something that our pupils can benefit from and find inspiration in then we just have to have it”.

When I arrived at Geelsgårdskolen, I was met by Line herself and a group of therapists, teachers etc., who were ready to tell me everything about their experiences with Hopspots now that they had had it for a couple of months. And, I got the chance to ask Line, what made her think that Hopspots was something for them.

She said: “The fact that you have the option of adjusting it to different target groups, because we are such a big school and have a huge target group. Thus, it is great that everyone can participate in each their way. Whether or not you need help to participate or you are physically and mentally capable of participating on your own. It is also a very attractive feature that Hopspots has both light, sound and color”.

Geelsgårdskolen really is big and handles a wide group of pupils with both physical, cognitive, communicative and social challenges. Which is why physio- and occupational therapy are an important part of the interdisciplinary collaboration between teachers, pedagogues and assistants.

The purpose of the physiotherapy training at the school is to improve the life quality of the children by maintaining and improving their ability to participate in activities and socialise. In practice, that is achieved by the training being an integral part of the teaching in the classrooms. The training is carried out through play and fun activities in the classrooms, which are to motivate the children and give them a feeling that the training is meaningful and fun – as Hopspots also focuses on. With Hopspots everyone can participate, no matter their level, AND the children are motivated via the games to do both physical and cognitive training as well as collaborate and be together.

The pupils ask for Hopspots themselves

Hopspots has now become an integral part of Geelsgårdskolen, and the staff has made their own booking system for the tool. The booking system clearly shows that Hopspots is being used every single day. Several of the teachers and therapists even have fixed arrangements with the pupils about when and where they use Hopspots. The staff told me that “Hopspots is out in the classrooms with the pupils A LOT, because it is so popular”.

Use Hopspots for both individuals and groups

Hopspots is either spread out in the great hall at Geelsgårdskolen, where it is used for classes/groups or it is used for individuals, where the staff has made their own games that are targeted to the individual pupils and his/her need and level.

You can do that e.g., in the memory game Mix’n’Match, where you have to match things in pairs. One of the teachers told me: “We used the children’ names and then something that characterized each of them, and then they had to match those pairs in the memory game”. One of the other teachers also tried that with her pupils, and she discovered that some of the pupils found it easier to understand the game if they placed the 12 Hopspots in two rows on the floor, instead of randomly.

That is because the pupils have a hard time managing chaos, whereas it is much easier for them to maintain the overview when things are placed in straight rows. In that way they could pick a spot on one side and see if it matched with one from the other side – that worked really well. One of the teachers said: “The children just really want to play. They think it (Hopspots) is so easy to use. The pupils that I work with just go ahead and play on their own. They really get it, also when they programme their own stuff”. Obviously, the children and teachers have really understood the part about programming ones own games and the children love that that is an option. 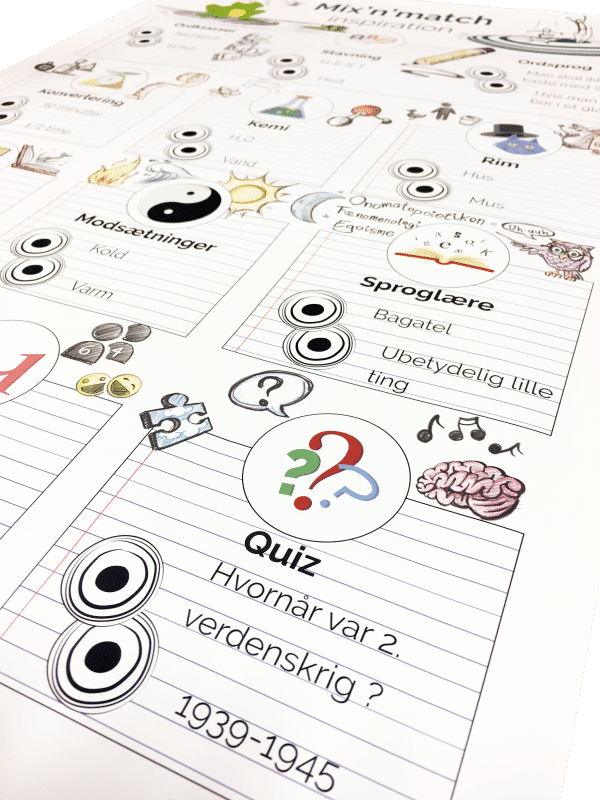 At Geelsgårdskolen they quickly discovered that not all pupils understand the part about catching red and green light in the game The Chase – then it is a good thing that the game can be adjusted. One of the teachers told me: “Cognitively they did not understand The Chase. So we played with two pupils with each six spots at a time, placed in a crescent around them, and set the game to “one team” and then it showed only red lights. In that way they could watch when the light showed on their spots and react on that, press the spot and watch when it was the other player’s turn”. Another teacher added: “We also did that: placing the spots real close and gave only two spots for each pupil to watch. They, as a group, thought that was a lot of fun”. Hopspots is easy to adjust to any level, both physically and cognitively, allowing everyone to participate.

“It is so creative and inviting”

I ended my visit with a couple of questions for the teachers and therapists who had been so kind as to participate. I asked them what they thought of Hopspots, and what it is Hopspots contributes with for the pupils, and the answers were clear:

“It is so inviting and creative. You simply can’t help but touch and play with it, and so can’t the children. There is something about the fact that the spots are lying there with light in and everything, that just really makes you want to do something with them. That is so cool”.

“It engages and motivates them and they become physically active. It is a bit of fresh air in the middle of their training, when you have been doing the same things over and over again. Then it is awesome to be able to bring this out to kind of “surprise” them”.