Release-party and test of The Island

The 13th of April we had a party and celebrated that we moved into our new office and that we released a new game; The Island. It all started in the afternoon, where we talked about the making of the game, the team behind it, the story itself and the test of the game. Ahead of the release pupils from Gammelgårdsskolen tested the game together with their teacher and two students, from the teacher education in Aarhus. The pupils got on stage at the party and told everyone about their experience with The Island.

The development of the game, The Island, began around two years ago and initally started out as “HistorieHopperen”, which was supposed to contain two interative stories, namely Lakridsmanden by Louis Jensen and The Island by Boris Hansen, of about 30 minutes in length. The Ministry of Education partly funded HistorieHopperen, which eventually turned into two separate games/stories independent of each other, which contained much more than what was intially intended and thus ended up taking much longer than half an hour to play.

The idea of The Island was that we would make a story come more alive by using the physical spots and movement. In that way including the pupils more in the story and making them collaborate across the entire class when making decisions and moving around the story. A lot of different people have been involved in the development of The Island, which we after two years of work released on the 13th of April, where it thus became available to all Hopspots-users. We are very greatful to all of these people – without this superb team of people to solve the different tasks making the game wouldn’t have been possible.

The Island by Boris Hansen

The Island is an interactive Robinsonade written by author Boris Hansen. Boris normally works for the publishing house Tellerup, where he typically writes fantasy novels for children and young people thus having Boris write a story for Hopspots seemed obvious. On the day of the release Boris shared a bit about the thoughts behind the story and to the people who didn’t yet know the story he revealed a bit of it, and we played part of the game together.

Boris among other things told that the idea of the game was to make it widely applicable in terms of target audience and age, and that he wanted to make a game that had something to say and wasn’t just for fun. The author thought it would be fun with a game that challenged the players with different dilemmas that went beyond the physical use of Hopspots, but actually had consequences and engaged the children through their personal investment. 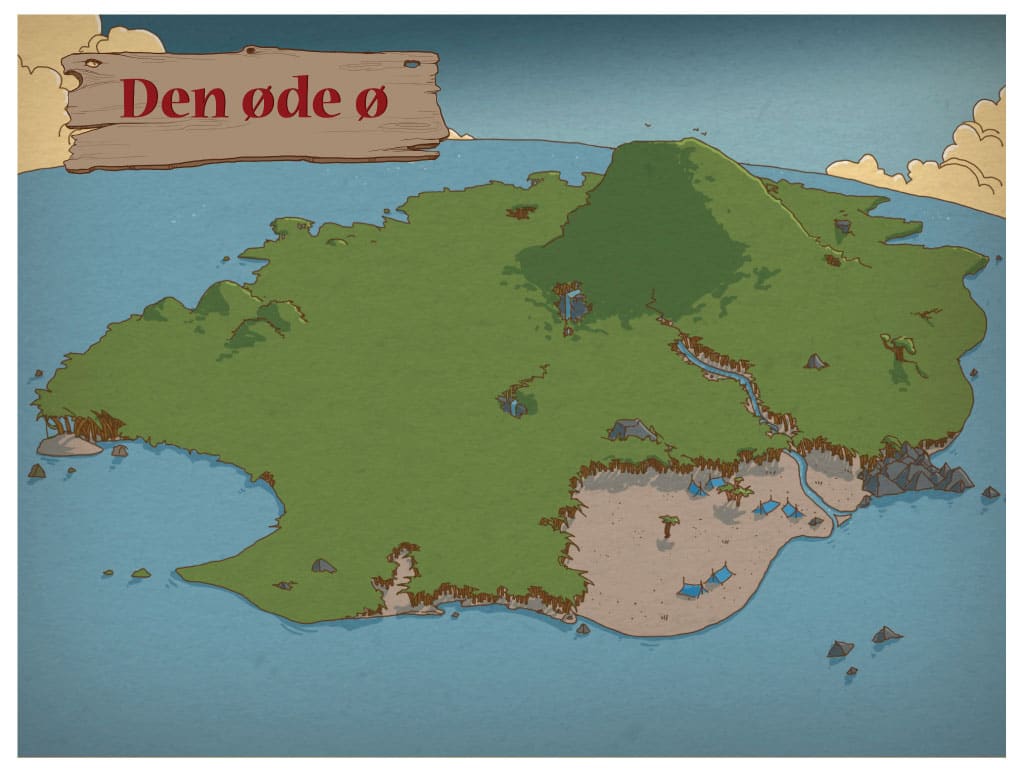 The Island is a classic scenario about a group of children, who are shipwrecked and stranded on a deserted island. They have washed ashore on a beach and cannot really remember what happened, but they are together and dependent on each other in their struggle to survive. In the game, The Island, the story takes place away from the Hopspots. That is, ideally the game is played on two iPads; one iPad is the Camp-iPad, which is located in the classroom, and the other is the Expedition-iPad, which is located with the Hopspots, where you solve different mini-games in order to improve your chances of survival. The main part of the game takes place in the classroom, where the pupils discuss what they are willing to do in order to survive.

Boris explained that his original idea was that the game should be solely focused on the pupils and their internal conflicts, and the island itself became the framework of the discussions. Thus, the dilemmas were actually only supposed to focus on how the pupils would organise themselves internally. But, as Boris said himself:

”I am first and foremost a fantasy writer thus I quickly started getting this idea that the island perhaps wasn’t quite as deserted as the game first let out to believe… It actually strengthened the moral dilemmas that the pupils suddenly had to take into consideration that there might be something outside of the camp for them to watch out for. “How are we going to deal with the fact that there suddenly may be something out there lurking on us? Are we ready to give up on our personal freedom in order to improve our level of security?””

Test of The Island

Prior to the release of The Island, the game was tested by a group of pupils from Gammelgårdskolen. The feedback from the pupils and their teacher was very helpful to us, and while they tested the game we made adjustments and learned from them what worked well, and not so well. In that way the pupils helped us make the game complete and well-functioning in practice.

The pupils played the entire game once. As they played the game during the Danish lessons they had breaks in between and the game thus took 4x 1,5 hours to get through. The two students from the teacher education, who have been following the pupils during the test, said at the release-party:

Likewise the pupils’ teacher also recommended using the game as a launch pad for the work the class is going to do:

”Besides from the fact that you can tell that it strengthens the class that they work in these groups and have to come to an agreement about some things they must consider when in much larger groups than what they are used to. You can also use the game as a launch pad to do writing tasks, writing Robinsonades e.g., so that’s what we have started doing after playing the game and I think it serves as an excellent starting point. I didn’t have to spend much time talking about Robinsonades because the children had already got at taste of it. So it was quite fast for us to get started. This is a different way of starting because traditionally you would have probably read Robinson Crusoe first or other novels with the same theme, and you would have started writing your own stories afterwards. In this case the children have played and have been engaged by both the bodily and democractic elements in the game”.

The two students from the teacher education, Louise Kaas Hansen and Trine Nedergaard Pedersen, who just wrote their thesis with a focus on The Island and it’s ability to motivate and create learning for pupils, among other things said about the game and the pupils’ experience: “The pupils got to be together with their classmates on a shared project where they had to communicate and collaborate constructively. They were motivated and wanted to participate”.

The two students saw a lot of possibilities for academic work outside of the game, as the 5th and 6th grade have a lot of focus on writing different types of texts. In their words: “That is, also fictional texts, the pupils worked with Robinsonades and after seven months they still remember the characteristics of it. We found evidence that the pupils’ experience with the game stayed in their memories and what they learned from it has been stored in their memories for good thus they have achieved learning and a deeper understanding”.

The pupils’ experience with The Island

In practice the pupils’ teacher divided the class into two groups, which played on each their iPad. When they were to go on expeditions they sent groups of 3-4 pupils out to the Hopspots, where they solved the mini-games on the iPad and spots.

The pupils were very positive about the game and their experience with playing, learning and movement during teaching. They said among other things the following about the game:

”I really liked that when it comes the dilemmas people have so many different opinions so that perhaps one part of the group wants to do this and the other part wants to do that, and then you had to take a vote because sometimes coming to an agreement was difficult”

”So it’s quite cool that you have to both move, read and listen carefully”. 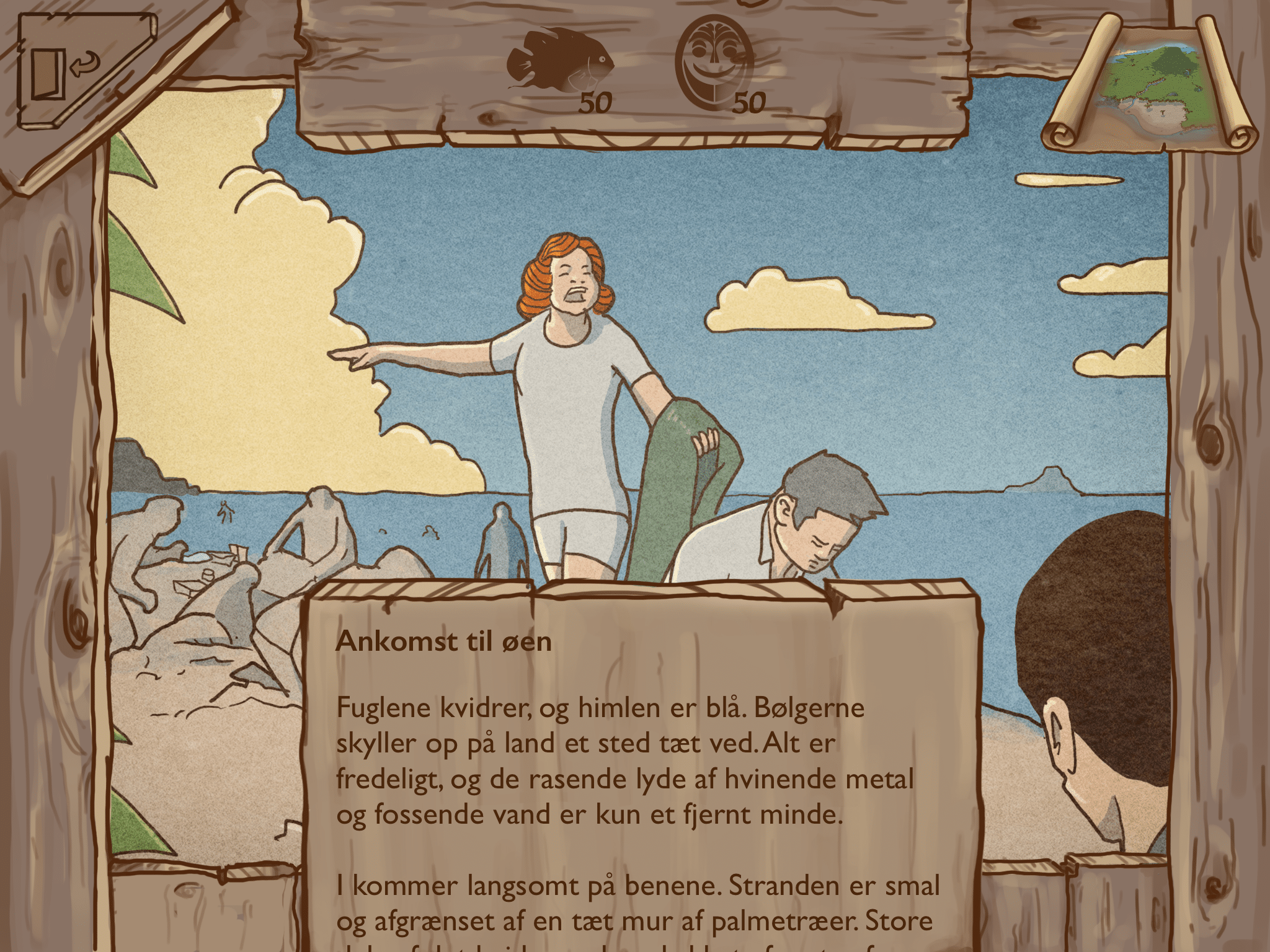 We are thrilled to hear that the pupils, the teacher and the two students from the teacher education had a good experience with testing the game for us. We are greatful for their help and feedback. Now, we really hope that the game is going to create a lot of fun with movement and learning for the Hopspots-users.

Learn more about the game and download a step-by-step guide for how to play The Island on: https://www.hopspots.dk/en/games/

About the Author: Trine Askjær-Jørgensen 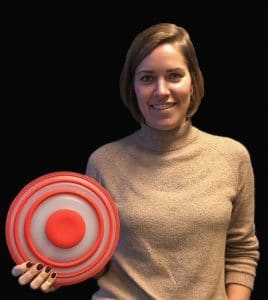 As a Master of Arts in English Trine excells in English and has a lot of knowledge about cognition, language acquistion etc. Her job at Hopspots consists of translating, proofreading as well as writing content for both our English and Danish websites, Facebook and so on.