‘The Island’ – an interactive Robinson Crusoe-adventure

During Aarhus Festuge 500 schoolchildren at the ages of 9 to 16 participated in a classical Robinson-Crusoe-adventure in the area outside of Aarhus Godsbane’s platform 2. The children tested Child Experience Design’s new interactive adventure and survival game “The Island”, which combines an adventurous introduction to the classical social science problems with active play and storytelling.

In practice ”The Island” is played partly on an iPad, where the children are told a classic Robinson Crusoe-story through text and pictures and on interactive spots (Hopspots), which the children have to use in different ways when solving physical cooperation exercises. “The Island” introduces the children to a line of different dilemmas and social problems and the story about the shipwrecked children ends in different ways depending on the ways the children decide to deal with the challenges on the island. During Aarhus Festuge the game was expanded to include creative building activities, where the children among other things had the possibility of constructing a real life camp at Godsbanen, made up of driftwood like the one on the deserted island in the game.

Shipwrecked in a mysterious and dangerous world

On ”The Island” the children are shipwrecked in a foreign, strange and dangerous world. In order to survive the shipwrecked children have to build a well-functioning society from scratch. They have to make a lot of difficult decisions, which in an imaginative and thought-provoking way introduce the children to different fundamental societal problems about democracy, equality, liberty, surveillance, crime fighting, using violence against rival groups and so on. That is stimulating and creative play with an emphasis on cooperation and joint decision-making.

The author and game-designer of ”The Island”, Boris Hansen explains that he got inspiration for the story from the news media as well as classic survival stories about shipwrecks:

– ”I got inspiration from classics such as Williams Goldings ”Lord of the Flies”, but I also included many current political problems in disguise”, Boris Hansen says.

A new and exciting way to learn about literature and society

”The Island” isn’t fully developed yet but during Aarhus Festuge the interactive story still thrilled both the pupils and their teachers.

– ”We found the story exciting. The dilemmas are a good way of learning to cooperate and to solve problems together. It is a fun way of learning how to build a society”, Klara Wenzell from 7.x. at Gammelgaardsskolen said.

– ”It’s real fun having to make decisions that you won’t know the consequences of until afterwards. It didn’t always turn out like we thought it would”, Maja Bunch from 7.x added.

– ”The cooperation  and the dilemmas in ”The Island” work really well. In terms of social sciences the dilemmas are interesting, and in that way “The Island” is a good way of introducing the social sciences. The logics of the game and the idea of the point system the children are familiar with from other games such as Minecraft and the likes so in that way the game is also really well-suited to the children”.

Children from lower school levels were also intrigued by the atmosphere on ”The Island”:

– ”The Island” is democracy at eye level. The children really get engaged in the story and the dilemmas, and then they feel like they are making decisions that have authentic consequences”, Rikke Lund Gade, teacher for 5.b at Skåde Skole explained.

Lene Nedergaard, Danish teacher to 5.a at Gammelgaardsskolen had a similar experience with her pupils:

– “The children got extremely tired from having discussed all the problems in the Robinson-Crusoe-game. They really cared about I and got some great discussions out of it so that was really exciting”, Lene Nedergaard explained.

One of the reasons why many of the schoolchildren loved ”The Island” was because the game combines teaching with play and physical movement. Many teachers experience that that is a great combination when they have to motivate the children. Danish teacher Malene Beckman, who participated in “The Island” with 4.b from Rønde Skole, explained:

– ”I think the idea of interactive teaching and movement is great. The children have so much energy. They can’t sit still for too long and you can either try to force them or alter the teaching to suit their needs better. As a Danish teacher it is my experience that it works really well to use play and physical activity when teaching the children for instance on topics such as mythology and archetypes. We already use iPads in the teaching thus it is great that the iPads can also be used for play and movement”.

The young shipwrecked children built a boat and various gadgets. 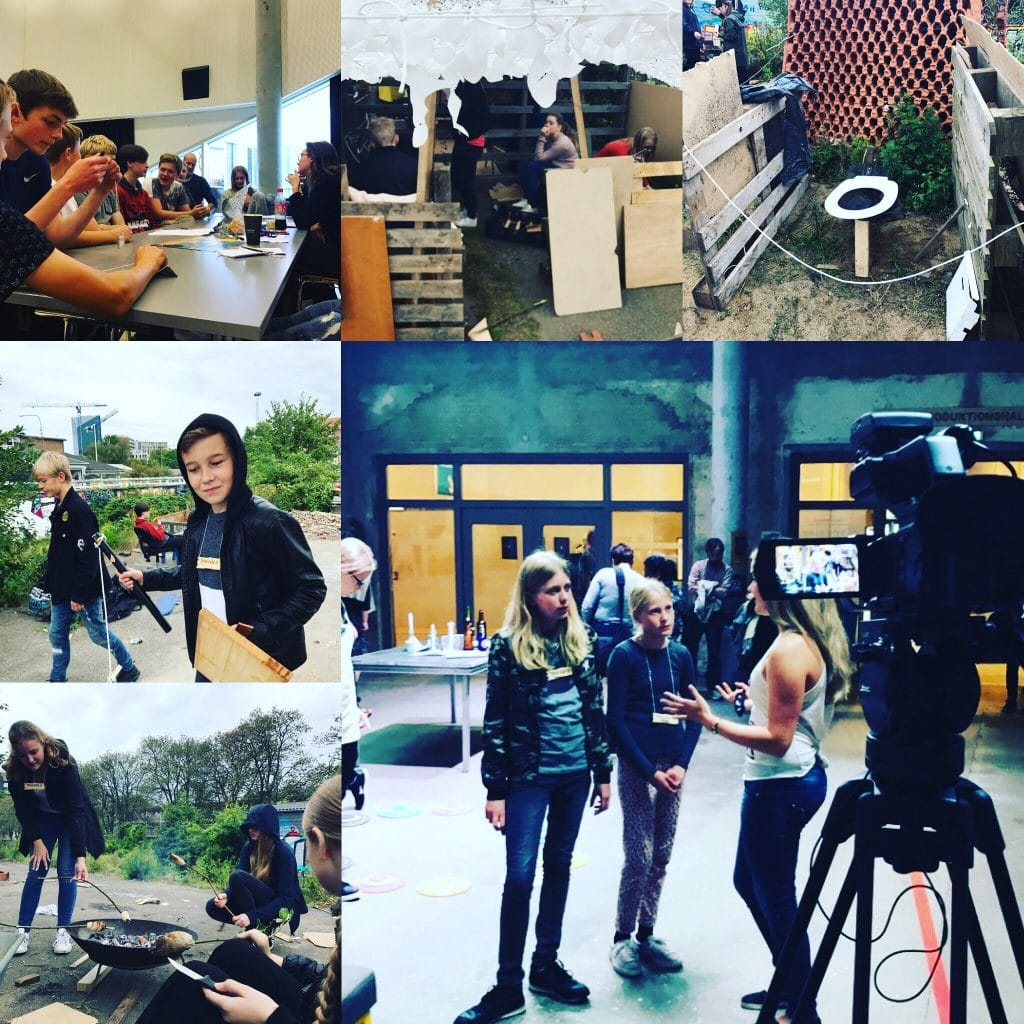 The shipwrecked children are being interviewed and show off the camp.